A History of Ferry County

The written history of Ferry County, though relatively short, has been eventful. The area now comprising the county was first mentioned in written records by David Thompson, explorer, surveyor, and fur trader, in an account of his trip down the Columbia River in 1811. Thompson stopped at a major salmon fishing site now known as Kettle Falls. He wrote a brief description of the surrounding country and remarked that the local native peoples had treated him well. He continued his trip down the river and left his native hosts to their fishing.

Although Thompson was the first to write down his observations on the Kettle Falls area, he was only the most recent in a long series of visitors. In Thompson’s day, Native American groups from many miles around gathered at the falls for the spring and summer salmon runs. This was the second most important fishing and gathering place on the entire Columbia. However the hundreds of native families who camped there were themselves simply the latest links in a long chain of residents. 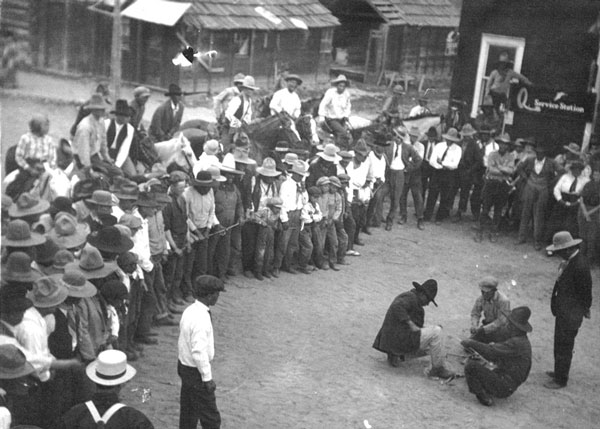 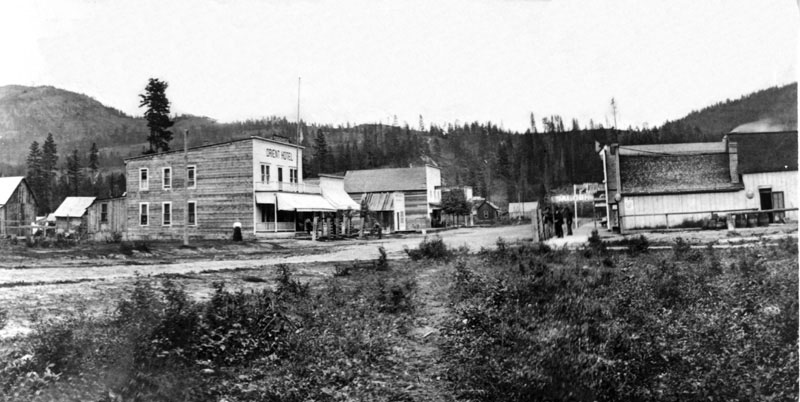 Archaeologists, working on both sides of the river at Kettle Falls, have located many buried camp sites. Some of these contain evidence indicating that people have lived here for at least 9,000 years. The rest of Ferry County has not been systematically investigated for traces of early people but many archaeological sites are known and many others probably lie undiscovered, an unusually rich cultural heritage just now beginning to be appreciated.

In 1824 the British Hudson’s Bay Company established a fur trading fort, Fort Colvile, just above Kettle Falls. Although the fort was located in what is now Stevens County, its influence spread across a vast area. Some of the Company’s retired French-Canadian employees were probably Ferry County’s first permanent European residents. They married into local Indian families and many of their descendants still live here. Their names can be seen in landscape features like LaFleur Creek and Pierre Lake.

The following decades were a time of rapid change. The first missionaries, both Catholic and Protestant, arrived in the 1830s. The Jesuit fathers and their Indian parishioners built St. Paul’s Mission near old Ft. Colvile and the Catholic Church became a strong and lasting force in the area. The influence of the missionaries was enhanced by the establishment of parochial schools and by the vaccinations with which they fought the last great smallpox outbreaks. Few of these events actually took place in Ferry County, but the new ideas and new technology spread rapidly, as did the practice of agriculture, introduced by the Hudson’s Bay Co. and encouraged by missionaries of all denominations. 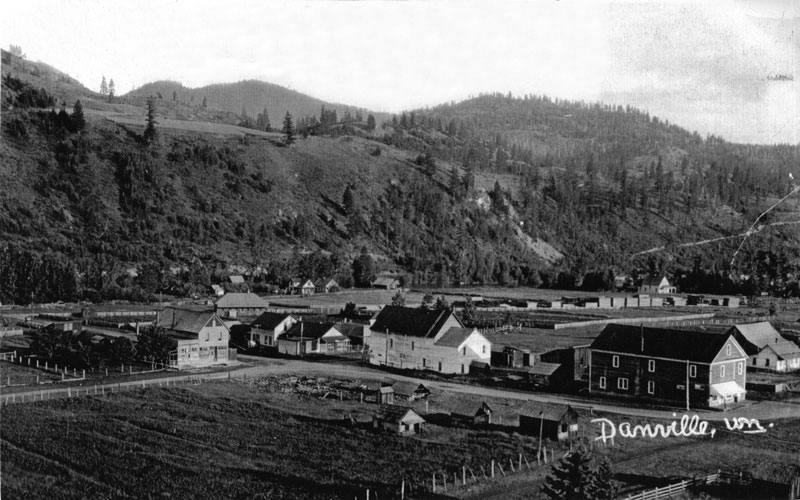 The next great changes came to Ferry County in the 1850s. Washington Territory was established in 1853. Four years later gold was discovered at Rock Creek in British Columbia just north of the border. Trails to Rock Creek cut across the rich interior valleys of the Kettle River and Curlew Creek and traveling prospectors had their first look at the country’s rugged beauty.

In 1859 a U.S. Army garrison was installed east of the present city of Colville. It was called “Ft. Colville”, confusing generations of historian and other visitors.

As the country filled with newcomers, land ownership became a pressing problem. A large tract of land, mostly mountainous and including all of modern Ferry County was set aside as Indian Reservation. Although it was called the “Colville Indian Reservation”, and present day descendants of its residents are members of the Confederated Tribes of the Colville Reservation, this territory originally supported several different Native American groups. Members of other groups, including Chief Joseph’s band of Nez Perce, arrived later, under severe pressure from the government and new settlers. The modern Confederated Tribes of the Colville Reservation, still residents on the reduced reservation lands, include descendants of at least 12 different ethnic groups.

In 1883 the area saw a brief glimpse of fame. General Sherman, a major Civil War figure, passed through on a tour of the frontier. While his exact route is not known he probably came over the Deer Creek-Boulder Creek route rather than the 5,575 foot pass that now bears his name.

The first U.S. government surveyors passed through Ferry County in 1893 and 1894. They established the township and range lines and made the first reliable notes on agriculture, residential development, trails and wagon roads in the area. These surveys set the stage for the biggest “boom” in the area’s history. 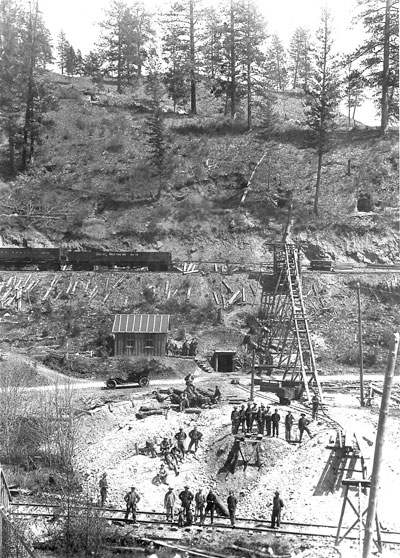 Eureka Gulch and Mines, 1903
The Jim Clark mine is visible on the lower foreground, the Surprise #2 to the upper right and the Belligerent on the upper left. The Great Northern rail bed is in the back and the Kettle Valley “Hot Air” rails in the foreground. 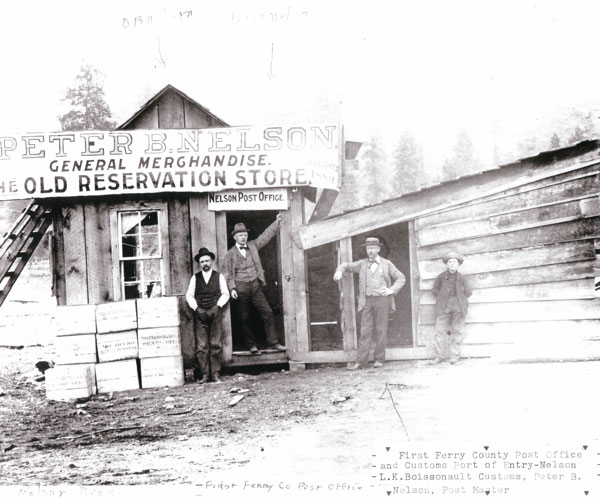 In February of 1896 the North Half of the Colville Indian Reservation, all but a few allotments still belonging to Native families, was opened for the staking of mineral claims. The first claim was staked in Eureka Gulch, just north of the present town of Republic. By that spring there were 64 men in Eureka Camp (now Republic) and the gold rush was on. Gold seekers poured into the booming tent town from all directions. Freight piled up at Marcus near the old Hudson’s Bay Co. fort. Business boomed in the little border town of Danville where the Nelson brothers, Peter and O.B., had established a trading post. Nelson boasted the county’s first, and for a while, only, post office.

The “rush” lasted until roughly 1900 and produced notable changes; Eureka Camp changed its name to Republic in honor of one of its major mines and acquired a post office. The business district moved south to its present location and the tents and canvas – topped shacks of the early days were replaced by frame buildings. A few of these still stand in spite of frequent fires. Thousands of mining claims were staked. Most of them “petered out”, some were absorbed by the growing town, some paid off modestly, and a very few made their owners rich.

1898 saw Republic’s first streets and lots platted. In the space of two months that year the town’s population increased by 2,000 people. Drinking water sold for 25 cents a barrel from a horse-drawn water wagon, and public policy decisions were made by mass meetings of miners. The following year Ferry County split off from Stevens County, took on a more formal form of government and became a county in its own right. It took the name of the state’s first governor, Elisha P. Ferry, as its own. That year also saw the loss of half the town’s business district to fire in spite of the efforts of the volunteer fire department.

Mining continued as a major industry. Other small mining towns sprang up. Some, like Curlew, Orient, and Keller still exist. Others, Toroda, Ferry, and Belcher among them, are only memories. In 1898 the “South Half” of the county, which is still reservation, was opened for mining. Claims produced scattered private lands within the reservation, a situation that is still causing controversy. 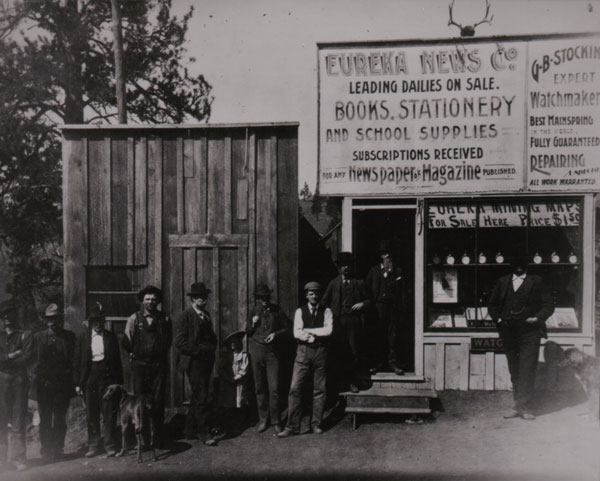 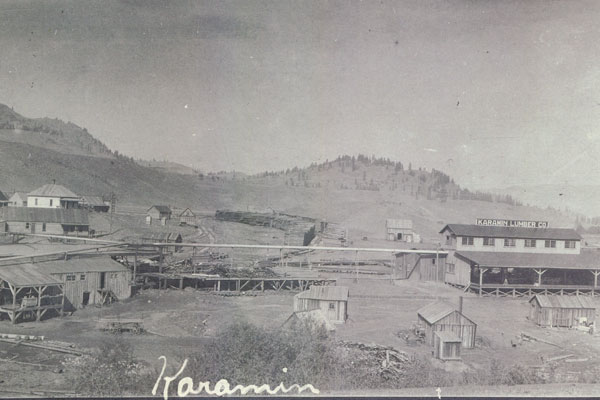 The turn of the 20th century brought more changes. Logging on the reservation had been strictly controlled, but in 1900 these restrictions were eased and small sawmills were soon operating up almost every creek. This pattern persisted into the 1950s; although by then the mills had changed from steam to gasoline, diesel and electricity. The turn of the century also brought the opening of the “North Half” to homesteading and the gold rush was replaced by a modest “land rush” as homesteaders rushed to the county seat in Republic to file on their chosen claims.

Although the first railroad franchise in the area was granted in 1889, construction did not begin until much later. Two rival companies, Washington and Great Northern and Republic and Kettle River, constructed their lines simultaneously during 1901 and ‘02 racing to reach Republic’s gold fields. The R. &.K.R.R. was a local line, intended to connect Republic with Canadian smelters. In its brief career it was known by seven or eight names and fought American railroad magnate Jim Hill to a standstill in court. This local line (known more or less affectionately as the “Hot Air Line” in honor of its somewhat overblown publicity), reached Republic first, but the Great Northern was not far behind. 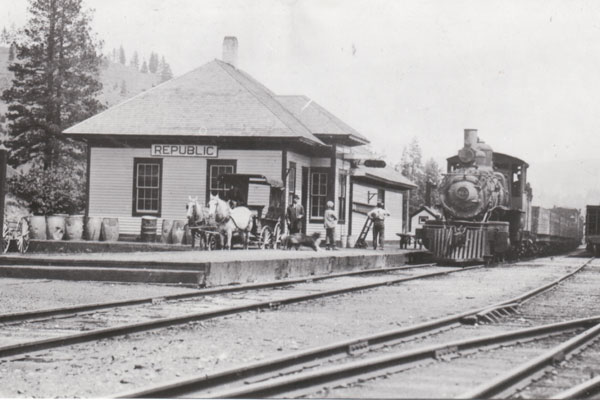 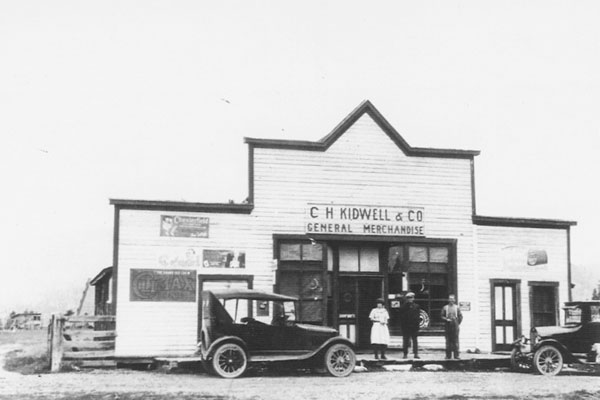 Both lines operated into the 1920s when the Hot Air finally went broke and shut down. The long predicted railroad “boom” never materialized and the small towns along the route sank into obscurity.

Part of the Great Northern route was followed by trains of the Burlington Northern Co. and its successor companies until 2006, when the route was vacated. The county has “rail banked” the former Great Northern right of way for public use and it is now being developed as a recreational trail.

Ferry County’s fortunes have shifted with the times since the early mining days. War and peace, depression and “boom” have left their marks. When President Theodor Roosevelt created the Forest Reserves in 1907, the first step towards establishing national forests, much of Ferry County was included. Most of this land remained remote and unreachable until the 1930s when the Civilian Conservation Corps built miles of forest roads and strung telephone lines, linking fire lookouts and ranger stations across the county. The construction of Grand Coulee Dam and the filling of Lake Roosevelt in the late 1930s provided jobs, electricity and irrigation projects. It also ended the county’s salmon runs, flooded hundreds of homesteads, Indian allotments and archaeological sites, changed the county’s Columbia River shoreline, and forced the towns of Keller and Inchelium to move to higher ground. 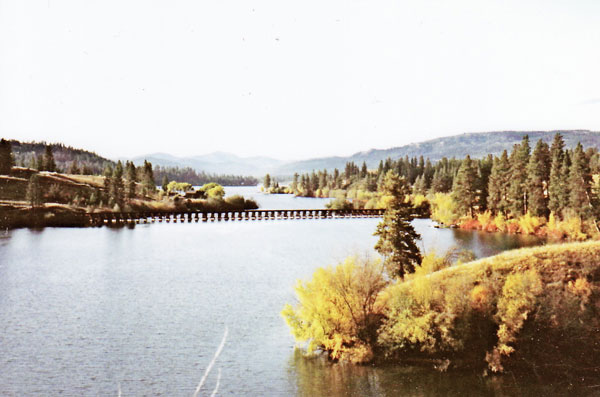 The 1950s saw the lowest ebb in population since the early gold rush days. This trend began to reverse itself during the 1960s and population increase has been accelerating ever since. In spite of recent changes, Ferry County continues to survive, and its residents preserve the tough and independent attitudes of the frontier so recently left behind.